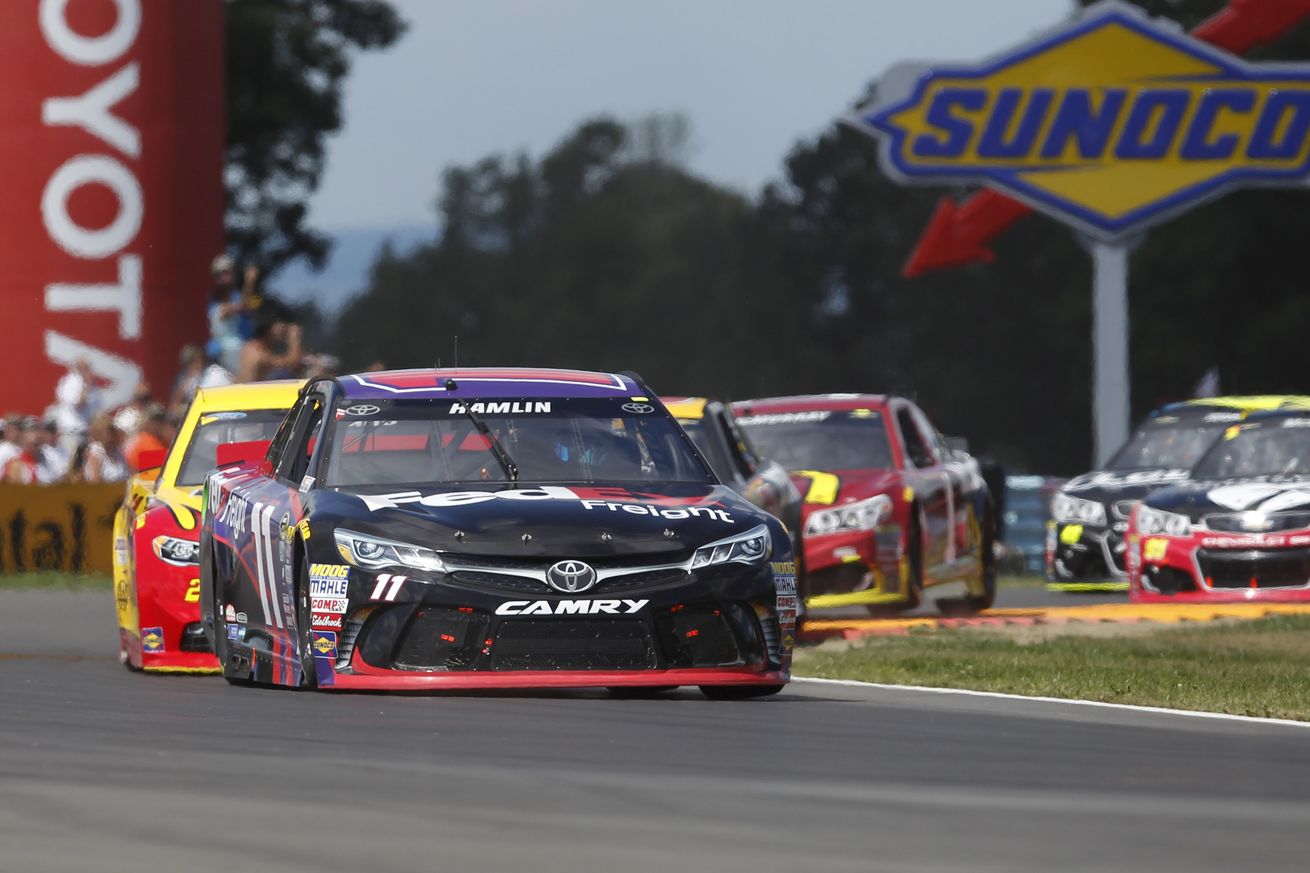 It’s a dominant stretch that includes victories in three crown jewel races, the Daytona 500, Coca-Cola 600 and Brickyard 400, often giving the impression that JGR’s Hamlin, Kyle Busch, Carl Edwards and Matt Kenseth, and FRR’s Martin Truex Jr., are competing for wins amongst themselves.

On Sunday, Truex was trailing Hamlin during the closing laps and would’ve finished second had Brad Keselowski not spun him just short of the checkered flag. Busch, the defending Sprint Cup champion, placed sixth and was in contention all afternoon; Kenseth scored 10th; and Edwards ended up 15th after starting on the pole and leading the first 25 laps before a pit road penalty and an accident slowed him.

That Hamlin credited his breakthrough first road course triumph to the tight collaboration between JGR and FRR, which essentially operates as one singular unit, came as no surprise. Busch and Truex took part in a test two weeks ago, and Hamlin’s No. 11 team used what they learned to establish a baseline setup for the weekend.

Such cohesiveness has quickly become the hallmark for a relationship still in its first season. The chumminess also includes all five crew chiefs direct messaging during races about pit strategy as well as an open notebook philosophy. That’s exactly the kind of unity Toyota envisioned when it recruited FFR to switch manufacturers last year and enter into a technical alliance with JGR, which supplies equipment and access to valuable data.

Although FRR wouldn’t add immediate significant depth, as it’s just a single-car entity, that didn’t matter. In fact, what that did was create enticing possibilities Toyota could use in building toward future successes.

After losing the heralded Kyle Larson to Chevrolet in 2012 because it didn’t have a clear path to provide a top-tier NASCAR ride, Toyota committed to establishing a pipeline from the grassroots level to Sprint Cup that actively seeks out young talent to sign and cultivate.

The carmaker now funds a sprint car program through Keith Kunz Motorsports and a Super Late Model team through Kyle Busch Motorsports. Drivers then can progress to the Camping World Truck Series, the Xfinity Series, and ultimately Sprint Cup.

The first product of this network is 20-year-old Erik Jones, a Michigan native who caught the attention of Busch after beating him to win a prestigious Super Late Model race in December 2012. Almost overnight, Jones became a rising star and rapidly advanced up the developmental ladder.

In November 2013, at 17 years, five months and eight days, Jones became the youngest Truck Series race winner. He subsequently won three more times the next season, despite running a limited schedule due to age restrictions. And in 2015, he not only won the Truck Series championship but also a pair of Xfinity events.

This season Jones is competing exclusively in Xfinity and already owns three victories and leads all series regulars in laps led. If there is such a thing as a blue-chip prospect in NASCAR, then he certainly fulfills the criteria.

Jones’ ascension, however, created a conundrum for Toyota: Where to place a talent deserving of a Sprint Cup opportunity when JGR’s roster was already up against the NASCAR-imposed four-team cap?

Enter FRR, which as a single-car outfit had plenty of room to expand. On Sunday morning, the Colorado-based team unveiled that it would add a second car beginning next season. And who will drive the newest addition to Toyota’s fleet? Jones, of course. This followed Truex and FRR announcing Thursday they had agreed upon a two-year contract extension.

Whether Jones remains with FRR beyond next season is open to speculation. He remains under contract to JGR and with Kenseth, 44, closer to the end of his career than the beginning, it’s realistic to view Jones as the former Sprint Cup champion’s heir apparent.

But if this scenario were to unfold, it wouldn’t be JGR cannibalizing its corporate teammate for its own betterment. Simply, Jones’ vacant FRR seat would then become occupied by another young hotshot in the Toyota system.

Those questions will be resolved with time. For now, JGR and FRR supremacy carries on with the Watkins Glen weekend serving as another reminder that Toyota is well positioned to continue winning both in the present and for years to come.