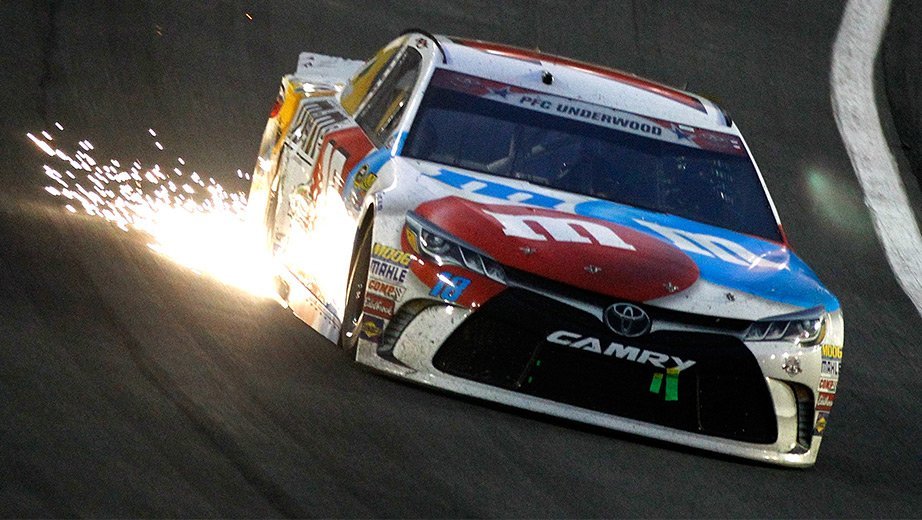 Except for a sign mounted on the outside wall facing the parking lot, the building is a nondescript brick, block and glass structure tucked back off the highway and surrounded by trees.

Inside, however, reside various pieces of equipment that can measure and simulate any race setup under any given condition.

There is a pull-down rig, an eight-post shaker rig, an AVCS (advanced vehicle cornering simulator) that also measures center of gravity height, and a full-blown race simulator in which drivers can log laps at just about any track on the series’ schedules.

The facility, which opened in late 2008, isn’t Sprint Cup specific. XFINITY and Camping World Truck Series teams have access to the facility and the tools within as well.

A similar facility located in Costa Mesa, California, has been around a good bit longer. The focus there is on the design and development, testing and production of race engines.

“Certainly, while our priority as a manufacturer (in NASCAR) is Sprint Cup racing, we feel a real responsibility to our partners in the Camping World Truck Series and in the XFINITY Series,” David Wilson, president, TRD USA, said during a recent media gathering at the Salisbury shop. “Really in this facility we think of as much is our teams as it is ours. We don’t own race cars. We never will. We rely on these partnerships with these teams. … Most of these organizations don’t have the resources, the capital resources to invest in a lot of this equipment.

“We like to think of this as an extension of their resources and an opportunity for us to give back and support particularly the more modestly funded organizations.”

It’s a much more active way of participating, Wilson said, rather than simply providing financial assistance to various teams.

“We like to get our hands dirty,” he said. “I always like to say rather than stroke a check we like to use technology as our principle currency. That allows us to get directly involved.

“In many instances that’s a painful path to take. Sometimes there are days I’d prefer to write a check. But again, our culture, that’s not what it’s about. On the whole, we very much enjoy establishing these relationships and partnerships across all three garages.”

Toyota teams in NASCAR’s Sprint Cup Series have won eight of 13 races thus far this season. That’s a big deal for the automaker, but others have fared just as well in the past. Chevrolet teams won eight of the first 13 races just last year.

The Salisbury shop isn’t the sole reason for such success, but it’s a big part of it.

“The great part about our sport, we’re not trying to read the book, we’re trying to write the book,” said Dave Rogers, crew chief for driver Carl Edwards and the No. 19 Joe Gibbs Racing team. “TRD makes these tools available so we can put our race cars on these rigs and learn more and more and more.”

Edwards is in his second season with JGR. His two victories earlier this season virtually assure his team one of this year’s 16 spots in the Chase for the NASCAR Sprint Cup. Teammates Denny Hamlin, Kyle Busch and Matt Kenseth have won one or more races this year as well, as has Martin Truex Jr., whose No. 78 Furniture Row Racing team gets a healthy dose of support from JGR.

“When you see all the tools Toyota and TRD have and see the way they are partnered with all their teams, and then if you go over to JGR and look at all the tools and all the people, it’s no mystery to me why we’ve run the way we do right now,” Edwards said.

“I’m pretty amazed, not just at the tools, but how everyone works together, how efficient the use of everything is. It’s pretty spectacular.”

Having access to such equipment is one thing. Maximizing its potential is another. Years of use and development have helped refine the process, making it easier to transfer information gleaned from one piece to the next.

“It took us a very long time but now that all of those rigs have gotten to a more senior place, so to speak, as far as the development and our process, they are all tied together and we can use them in conjunction,” said Andy Graves, group vice president and technical director for TRD USA. “We can use data off of one rig and leapfrog onto the next rig, which is very unique in this industry.

“I really believe what we’ve built is key and it helps us with keeping up with regulations, and as rule changes come, how you adapt and react is so important today. There are so many smart people on all the Cup teams; being able to react faster to rule changes is paramount, especially with the regulations against track testing. … How do you keep pushing forward when you are limited from that standpoint?”

There is no “magic” setup for sale here. Information among teams remains proprietary. Instead of telling teams how someone got to a certain point, Graves said, it’s more about “pointing guys in the right direction.”

“We’re not going to lay out a blueprint for ‘This is exactly what you have to do’ but we say, ‘This is what is possible,’ ” Graves said.

Concerns that Toyota is simply outspending the competition and buying its way into the winner’s circle “is patently not true,” Wilson said.

“We have the resources necessary to compete but again let’s put things in perspective. Toyota doesn’t own racing teams. We don’t race. We rely on our partners … we’re here to support them and help them.

“From the very first entry point into this sport, in talking to the fans and listening to some of ‘the sky is falling’ perspective, we’ve been very respectful of that. We don’t have an open checkbook and our success behind the scene has as much to do with our fiscal responsibility and the efficient way that we use our resources.”

Toyota teams number fewer than Ford and Chevy in NASCAR’s premier series, leading some to question the wisdom of such an investment.

“That’s what it takes,” Graves said. “If we weren’t up to the challenge maybe we would have just stayed in Trucks and weren’t interested in Cup, so to speak …