For the first time during the 2015 season, Snead Racing will be fielding two entries during this weekend’s Fun Ford Weekend at Bristol Dragway.  Coming off of his first win of the year during the most recent DER Racing Series event, Larry hopes for continued success during this weekend’s races.  Clinton, meanwhile, will be making his first start of the season and hopes to bring over some of the luck from Joe Gibbs Racing.

During the DER Racing Series‘ most recent event on August 2nd, Larry seemed to be unstoppable.  Over the final four rounds of eliminations, his slowest reaction time was .014, while his quickest was .001.  In the final round, Larry left the starting line with a reaction time of .003 and was able to ease off the gas at the finish line to go 5.240 on a 5.22 dial for the win. 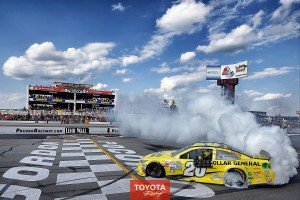 That same weekend, Clinton was tuning Matt Kenseth to victory at Pocono Raceway in Long Pond, Pennsylvania.  Matt had a very fast Toyota Camry all race long, but in the end it came down to a fuel mileage battle.  When teammate and fellow Toyota driver Kyle Busch ran out of fuel, Kenseth was able to drive around and win his second race of the year.  Coming into this off-weekend from work, Clinton and Toyota Racing Development (TRD) have assisted Joe Gibbs Racing in winning 6 of the last 9 NASCAR Sprint Cup Series events.

The Snead Racing team will start their weekend off with a Gambler’s race Friday night at 6pm.  The team will then be back at the track at 8am Saturday for two more races during the day.  Be sure to come out and support the team!  For more information on the weekend, please see the Event Flyer and visit BristolDragway.com.