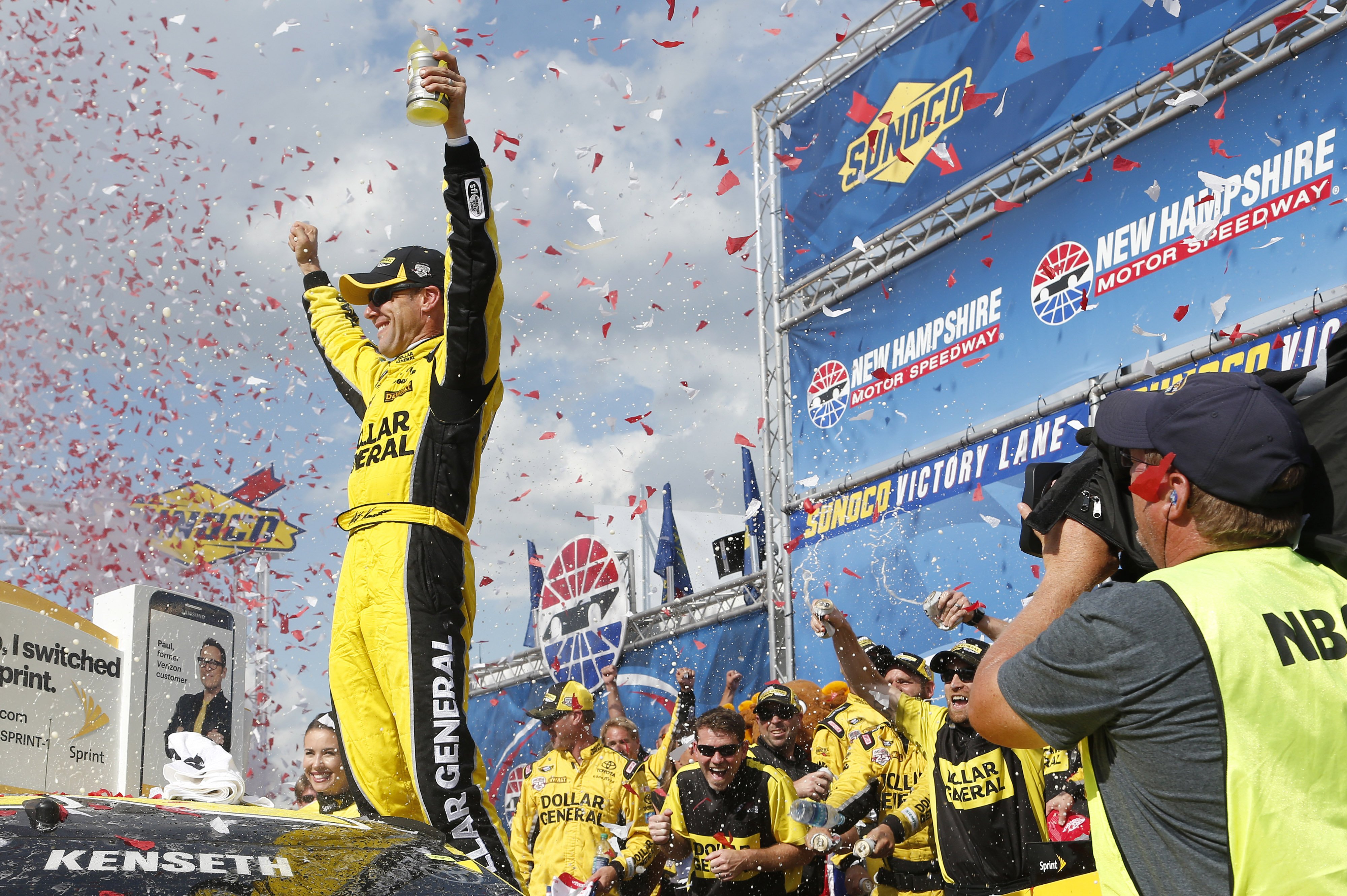 Matt Kenseth patiently raced his way to the front of the field and led the final 31 laps to capture the win in today’s NASCAR Sprint Cup Series New Hampshire 301 at New Hampshire Motor Speedway. Teammates Kyle Busch and Denny Hamlin earned top-ten finishes crossing the line in eighth and ninth respectively, while a late-race accident left Carl Edwards back in 20th.

Matt Kenseth started the No. 20 Dollar General Toyota in 18th but showed speed from the outset of today’s race as he began to climb his way into the top 10. Last fall’s New Hampshire race winner was up to eighth by lap 50 and was into the top five by lap 72. Kenseth would remain in the top five for the majority of the afternoon from that point. He would restart third with 75 laps remaining and was able to move into second on the restart and pressured the leader Martin Truex, Jr. for the next 30 laps before finally make the pass for the lead with 44 laps to go. A caution with 37 laps remaining would bring Kenseth down pit road for two tires and he would restart second behind Hamlin who did not pit. Within a couple laps he would have the Dollar General Camry back on point before another caution fell with 29 laps remaining. He would restart in first with 24 laps to go and drove away before another caution just four laps later. Kenseth would hold off his competitors through a couple more late restarts before earning his second win of the season.

Kyle Busch started the No. 18 Interstate Batteries Toyota in second and wasted no time moving around pole sitter Jimmie Johnson for the lead on lap two. He would go on to lead 86 of the next 87 laps. Busch was never far from the front of the field this afternoon and he would take over the point again on lap 172 for 11 laps and then again on lap 185 for another 36 laps. A caution would set up a restart with 75 laps remaining and Busch would line up second for the restart after adjustments made to loosen up his Interstate Batteries Camry for the long run. He would drop back to run third shortly after the restart before a caution with 37 laps remaining. After another couple of cautions, Busch lined up third for a final restart with 11 laps remaining. Contact from several cars on the restart would shuffle the Interstate Batteries back outside the top five. He would finish eighth despite leading a race-high 133 laps this afternoon.

Denny Hamlin started the No. 11 FedEx Office Toyota from the fifth position and was up to third for a lap 40 restart following a two-tire pit stop under the day’s first caution. The 11 would lose a few spots on pit road causing him to restart eighth at lap 108 and he would run 10th at the halfway point. Hamlin would move into sixth on lap 248. A caution would come out with 37 laps remaining and crew chief Mike Wheeler would make the call for the FedEx Camry to remain out on the track while many of the other leaders pitted for fresh tires. That would put Hamlin at the point for the restart with 33 laps remaining. He would hold the lead through the initial lap but he couldn’t hold off his teammate Kenseth for long. Hamlin would restart second with 24 laps to go but this time he couldn’t get going when the green flag dropped and was shuffled back to fifth just a couple laps later. When a caution fell just four laps later Hamlin would bring his Camry down pit road for fresh tires leaving him to restart back in 25th with 17 to go. An accident in front of Hamlin on the restart would allow him to jump all the way into 15th for another restart with 11 to go. He would drive his way back into the top ten to earn a ninth-place finish.

Carl Edwards started the No. 19 Sport Clips Toyota from the 13th position but was able to drive his way toward the top ten and an early two-tire pit stop following a competition caution on lap 36 would move him up to fifth for a lap 40 restart. He would continue to battle inside the top ten through most of the first half of the race and was ninth at the midpoint. Edwards would fall outside the top ten for much of the second half of the race, but managed to regain track position toward the end of the race and lined up eighth for a restart with 17 laps remaining. However contact from the 31 sent him up into the 5 car causing a chain reaction accident. The Sport Clips Camry would have to come down pit road for quick repairs and fresh tires. He would line up 25th for another restart with 11 to go before going on to finish 20th.

Kenseth captured the win, followed by Tony Stewart, Joey Logano, Kevin Harvick and Greg Biffle rounded out the top five. There were seven cautions for a total of 36 laps and 13 lead changes among six different drivers.

The NASCAR Sprint Cup Series will head to Indianapolis Motor Speedway next Sunday. Live coverage of the Brickyard 400 will be carried by NBCSN on Sunday, July 24 starting with its pre-race show at 2 PM ET (race starts at 3 PM ET). Live coverage will also be carried on Sirius NASCAR radio channel 90.