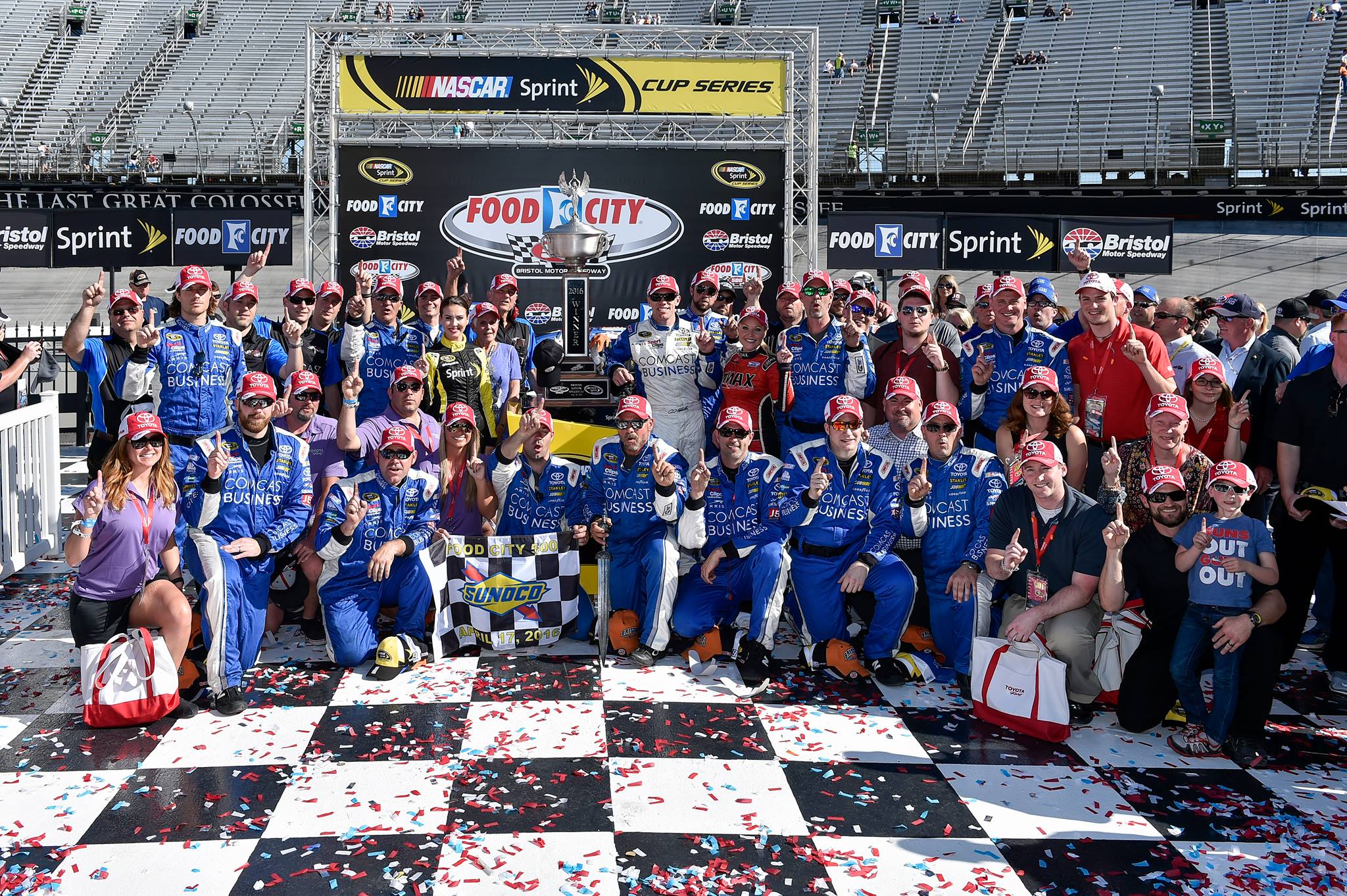 Meanwhile it was a day of frustration for his Joe Gibbs Racing teammates who battled through several setbacks including a series of blown right front tires. When it was over Hamlin would be scored 20th, while Kenseth was 36th and Busch 38th. 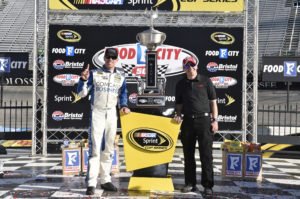 Edwards started the No. 19 Comcast Business Toyota on the pole position and led the opening 36 laps. Edwards would remain solidly in the top five for much of the first third of the race and was back at the front of the field by lap 200. He would continue to hold the top spot through a series of cautions and by lap 250 he had led a total of 100 laps. Edwards would continue to lead the field through a series of cautions over the next 100 laps. The 41 car would get around Edwards on lap 365 on a restart, but he would regain the lead prior to another caution with 90 laps to go. The Comcast Business crew would keep him on the lead following pit stops and the 19 car shot to the front once again with 85 laps remaining. Edwards would hold the lead through several late race restarts to earn the win. The victory virtually ensures his place in this year’s Chase for the Sprint Cup Series Championship.

Hamlin started the No. 11 FedEx Freight Toyota from the fourth position and was able to remain inside the top ten through the first third of the race. Hamlin, who had suffered some right front damage to his FedEx Camry during Saturday’s practice session, would find the situation aggravated after contact with the 44 car on pit road. He would bring the 11 car back down pit road for additional repairs which forced him to restart outside the top 20 just prior to the 200 lap mark. The FedEx crew would make additional repairs under the next caution on lap 222 and Hamlin would restart as the last car on the lead lap in 30th on lap 227. Hamlin was running 24th at lap 250 and was back inside the top 20 by lap 325. A pit road penalty for improper fueling would add to the setbacks and Hamlin would restart 20th on lap 345. A flat right front tire would send the FedEx Camry into the outside wall with 90 laps remaining. Hamlin was able to come down pit road under caution for repairs, but would restart a lap down on lap 415. He would go on to finish 20th.

Kenseth started the No. 20 Dollar General Toyota in the second position but was able to make the pass of his teammate Edwards for the lead on lap 36. Kenseth would lead 142 laps before a blown right front tire sent him into the outside wall. The Dollar General crew would make the necessary repairs on pit road allowing him to remain on the lead lap and restart just outside the top 20. He would restart 20th on lap 227 and was up to 15th by lap 240 and 14th at the halfway point. Kenseth would work his way back inside the top ten and was back inside the top five by lap 300. He was running third when another blown right front tire would force him into the outside wall once again on lap 323. This time the damage was too great to fix on pit road and the Dollar General team would have to take it to the garage for repair. He would make it back out to finish the race but was 40 laps down to the leaders and would go on to finish 36th.

Busch started the No. 18 M&M’S 75th Anniversary Toyota from the fifth position and was able to race his way up to third over the course of the opening green flag run. Unfortunately the M&M’S Camry would blow a right front tire resulting in contact with the outside wall to bring out the day’s first caution on lap 50. The crew would keep the 18 on the lead lap and Busch slowly began to fight his way back to the front of the field. However contact from the 34 car on lap 117 would cause Busch to spin. He would keep the car out of any additional damage and was once again able to remain on the lead lap. Busch would start the comeback climbing his way back inside the top 20 and back into the top 10 by lap 170. In fact, he was running eighth on lap 175. Busch would face another setback when NASCAR ruled he was too fast on pit road. That sent the 18 to the back of the lead lap cars. Once again Busch would fight back however and he was back inside the top 15 to restart 13th on lap 227. After an eventful first half of the race Busch was running 10th at lap 250. Just 10 laps later Busch would blow another right front tire and this time his hit to the outside wall would cause major damage. Despite the team’s best effort to recover from the setbacks his day would be over and he would officially be scored 38th.

Edwards captured the win, followed by Dale Earnhardt, Jr. in second, Kurt Busch third, Chase Elliott fourth and Trevor Bayne rounded out the top five. There were 15 cautions for a total of 102 laps and 16 lead changes among seven different drivers.

The NASCAR Sprint Cup Series heads to Richmond International Raceway next Sunday for an afternoon race. Live coverage on Fox will start Sunday, April 24 at 12:30 PM (race starts at 1 PM ET). The race will also be carried on Sirius NASCAR radio channel 90.