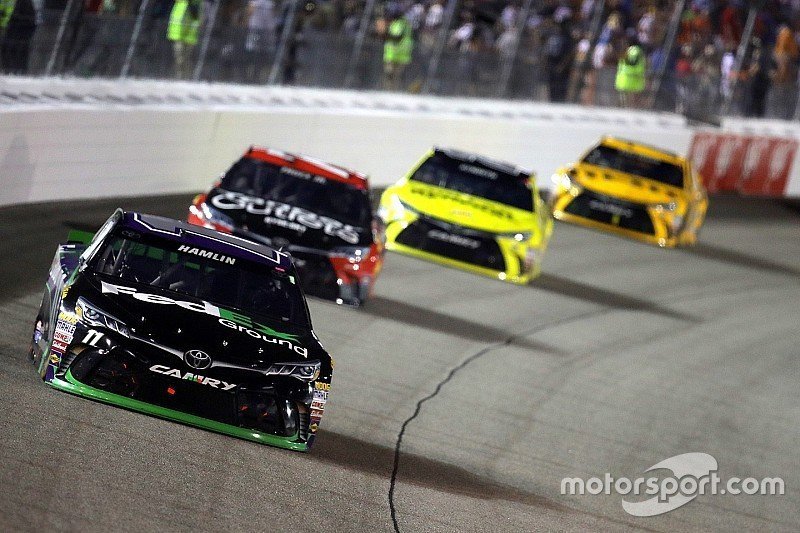 If the domination exhibited by Denny Hamlin and Martin Truex Jr. at Richmond International Raceway is any indication, the answer is no.

Those two Toyota drivers led all but 25 of 407 laps in Saturday night’s Federated Auto Parts 400, the cutoff race for the Chase for the Sprint Cup.

Sure, Chevrolet showed up in the Federated Auto Parts 400. Kyle Larson held the point for 15 laps and was able to get a nose in on the Toyotas on restarts — before they drove away. Pit strategy for tires and an aggressive final restart enabled Larson to finish second. Kurt Busch also excelled at times and could battle up front with the best of cars. But Kevin Harvick and Jimmie Johnson were never factors in Richmond.

As for the Fords, Brad Keselowski led the charge with a fourth-place finish. But the only Ford to lead laps all night was the No. 32 driven by Jeffrey Earnhardt, who led the first laps (two) of his career during the first caution before finishing a career-high 27th. Joey Logano ran in the top 10 most of the night but was never a threat. Ford’s only other Chase entry, Chris Buescher, did a yeoman’s job of keeping his car in one piece — even surviving the scuffle between former teammates Tony Stewart and Ryan Newman — to salvage a 24th-place finish and move on to the playoffs.

Once the dust settled and the drivers were reseeded in the Chase field, it was a Toyota world, and everyone else was just trying to keep up with the Camrys. Although the top two drivers each had four wins in the regular season, defending Sprint Cup champion Kyle Busch led the standings over Keselowski on a tie-breaker. Hamlin sits third — with three wins — followed by Harvick, Carl Edwards, Truex, Kenseth and Johnson, each of whom have two wins.

Of the top eight drivers, Toyotas earned five positions with the other three held by former champions. This season, those five Toyota have led 55.8-percent of all laps raced. It’s not surprising that with so much time at the point that drivers have won 13 races.
Coach Gibbs knows the Chase will be a dogfight

Team owner Joe Gibbs graciously said on Saturday night there is no clearcut team with an advantage. Coming from the position of having four drivers in house — along with the Furniture Row Racing entry — capable of advancing to the final round, Gibbs understands the Chase will be a battle.

“There’s no way that you can I think pick a favorite right now because it’s really three‑race playoffs,” Gibbs said. “We saw in our history Denny’s been knocked out, Kyle’s been knocked out with just kind of weird things that happen. You can’t afford a bad race. And so I feel like what we tried to do this year, I watch the crew chiefs, drivers and everybody, we just try to go every week and be as good as we could be and race as hard as we could.

“I think Wheels (No. 11 team crew chief Mike Wheeler) said they tried a few things earlier in the year. But really each and every week I felt like we kind of went after it and we felt like that was the best way to prepare for the Chase. So really our playoff is one where you got to be consistent, but also you got to be on your game and racing extremely hard.

“So, yeah, I don’t think there is a favorite right now. I think everybody that’s in there is going to have a shot. We saw the 78 (Truex) last year go all the way to the final round, single‑car team. All kinds of things can happen in what we’re doing here. So I think it’s the greatest reality show going.”

Realistically, asking Joe Gibbs to pick a Chase winner is akin to asking someone to pick a favorite child. Gibbs may not know who the champion will be, but you can bet he believes the winning driver will come from his extended Toyota family.