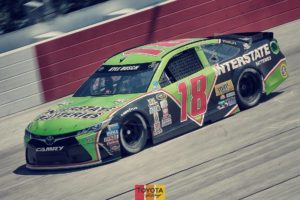 Tonight’s race honored both the past and the present of NASCAR with Darlington Raceway celebrating throwback weekend for the second consecutive year. Special paint schemes adorned all four JGR Camrys to help celebrate the popular theme.

Denny Hamlin started the No. 11 Sport Clips Toyota from the seventh position and was able to hold that spot through the first round of green flag pit stops. A caution would come out on lap 96 during a round of green flag pit stops forcing the 11 to take the wave around and restart eighth on lap 104. He would line up ninth for a restart on lap 119. Hamlin was running fourth at lap 200 would line up fifth for a restart on lap 218. A great stop by the Sport Clips pit crew put Hamlin on the lead for a restart on lap 255 and he was running third with 100 laps to go. Hamlin would restart fifth on lap 332 and was running sixth with 18 laps remaining when another caution came out. The FedEx crew would deliver another great pit stop allowing Hamlin to restart fourth with 11 laps remaining. He would hold that position to the checkered flag.

Matt Kenseth started the No. 20 Tide Pods Toyota in the 10th position and was strong through the early going making his way up into the top five over the course of the opening 50 laps of the race. Kenseth was running third following the first round of green flag pit stops. A caution would come out on lap 96 during a round of green flag pit stops forcing the 20 to take the wave around and restart sixth on lap 104. He would line up seventh for another restart on lap 119 and was running fifth by lap 140. Kenseth was sixth for a lap 218 restart. Crew chief Jason Ratcliff would bring the Tide Pods Camry down pit road for extended adjustments on lap 251 and Kenseth would line up 14th for a restart on lap 255. Another quick caution would come out and this time the 20 team made the call to remain out on the track allowing Kenseth to restart first. He would drive out to the lead for a few laps but even slightly older tires make the difference on this track and he would fall back to run sixth before the night’s next caution. He was running seventh when another caution came out on lap 279. Kenseth would hold steady in the top ten for much of the rest of the night. He was seventh when a caution with 18 laps to go came out and restarted seventh with 11 laps to go. The Tide Pods Camry would gain one spot on the final run to finish sixth.

Kyle Busch started the No. 18 Interstate Batteries Toyota from the sixth position and was able to move into the top five early before settling in to run 10th following the first round of green flag pit stops. A caution would come out on lap 96 during a round of green flag pit stops forcing the 18 to take the wave around and restart 13th on lap 104. He would make his way back into the top ten prior to the next caution just 10 laps later. He would restart eighth for another restart on lap 119. Busch was up to sixth by lap 140 and ran fifth on lap 200. Busch would restart second on lap 218 and continued to run in the top five, lining up third on lap 255. He was running fourth with 100 laps to go, but the handling on his Interstate Batteries Camry would change and the 18 would fall back to 10th when a caution came out on lap 279. He would continue to struggle with the handling issues and was running 13th on lap 306. Busch would restart 11th with 11 laps to go and held that position to the checkered flag.

Carl Edwards started the No. 19 ARRIS Toyota from the third position and although he dropped back a bit at the start he was able to make his way back to the top five prior to the first round of green flag pit stops. Edwards was running ninth at lap 75. A caution would come out on lap 96 during a round of green flag pit stops forcing the 19 to take the wave around and restart 12th on lap 104. He would line up 16th for a restart on lap 119 after an extended trip down pit road for adjustments on his ARRIS Camry. Edwards was back in the top ten by lap 140. Edwards was running eighth at lap 200, but crew chief Dave Rogers made the call for an extended pit stop to help the handling on his car. He would restart 16th on lap 210 and would pit again when another caution came out quickly. He lined up 17th for a restart on lap 218 and was up four spots in just 15 laps. Edwards would line up 13th for a restart at 332 but he had suffered some damage to the left front of his car while on pit road that caused his left front tire to start to go down shortly after the green flag dropped again. He would have to pit under green for repairs. The ARRIS Camry would fall two laps off the pace, but Edwards managed to get one lap back to finish the night in 19th.

Martin Truex, Jr. captured the win, followed by Kevin Harvick, Kyle Larson, Hamlin, and Joey Logano rounded out the top five. There were 10 cautions for a total of 52 laps and 14 lead changes among eight different drivers.

The NASCAR Sprint Cup Series will head to Richmond International Raceway next Saturday night for the final race before the race for the NASCAR Sprint Cup Series Championship. Live coverage of the race will be carried by NBCSN on Saturday, September 10 starting with its pre-race show at 7 PM ET (race starts at 7:30 PM ET). Live coverage will also be carried on Sirius NASCAR radio channel 90.