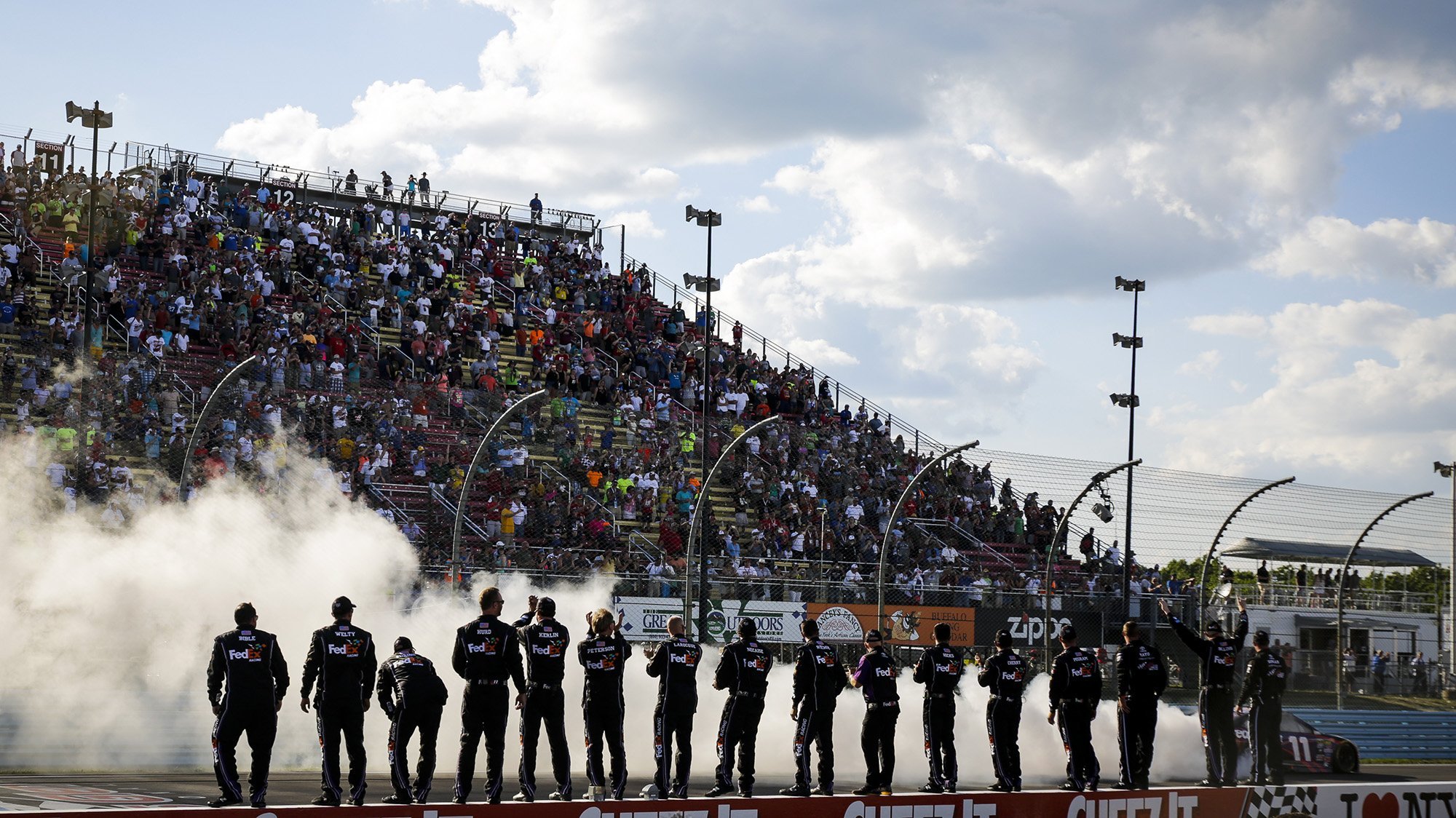 Denny Hamlin started the No. 11 FedEx Freight Toyota from the sixth position and held steady in the top ten prior to his first round of pit stops. With various pit strategies at play Hamlin would drop back outside the top 15 and was running 18th at lap 30. He would race his way back to 14th by lap 42 and found himself in seventh at the halfway mark of the race. Crew chief Mike Wheeler would make the call to remain out on the track and attempt to save enough fuel to make it to the end. Several late cautions would help that cause. Hamlin lined up third for a restart with 10 laps to go and he took advantage of the battle between the 18 and 2 to move to the lead before a caution came out. He would manage to maintain the lead through two more late restarts and several late challenges to earn his first career win at Watkins Glen International.

Kyle Busch started the No. 18 Snickers Crisper Toyota from fifth position and raced his way into second early on behind his teammate and pole-sitter Carl Edwards. There are always a number of pit strategies at road course races and today was no different. The 18 Camry would pit for the first time on lap 26 leaving him to run eighth at lap 30, but Busch would maneuver his way back to second just six laps later. He would take the lead on lap 45. Busch would pit and lined up ninth for a restart with 34 laps remaining. The Snickers Crisper Camry would make its way back into the top five and lined up second for a restart with 10 laps to go. Busch would make a strong move in an attempt to wrestle the lead from the 2 car, but the two would get loose with the 18 getting the worse end of it and dropping back outside the top five. He would go on to finish sixth.

Matt Kenseth made his 600th NASCAR Sprint Cup Series start this weekend at Watkins Glen International. He started the No. 20 Dollar General Toyota in the fourth position, moved up to second over the opening ten laps of the race and battled inside the top five for much of the first third of the race. He would pit for the first time on lap 26 and with various pit strategies at play he would shuffle back outside the top ten. Kenseth would race his way back into the top five at the halfway mark. The 83 car would run Kenseth off the track on a lap 60 restart costing the Dollar General Camry several spots. He would manage to battle his way back over the course of a few late restarts to finish 10th. The top-ten finish was the 300th of Kenseth’s career.

Carl Edwards started the No. 19 STANLEY Toyota from the pole position after earning the top spot in yesterday’s qualifying session. He would lead the opening 25 laps of the race. A pit road penalty would drop Edwards back in the field and the loss of track position would prove difficult to battle back from. Pit strategy would help put the No. 19 STANLEY Toyota back inside the top five just halfway through the race. He would run second when the race was red flagged on lap 53. Edwards would have to pit once the red flag was lifted dropping him back to 23rd. He would get caught up in an accident on the ensuing restart, but fortunately the damage wasn’t too severe. He would restart 29th on lap 59. Edwards would and the STANLEY team would battle back to finish 15th.

Hamlin captured the win, followed by Joey Logano, Brad Keselowski, AJ Almendinger, and Tony Stewart rounded out the top five. There were eight cautions for a total of 20 laps and nine lead changes among eight different drivers. There were also two red flag stoppages for a total of 30 minutes.

The NASCAR Sprint Cup Series will take its final week off of the 2016 season before returning at Bristol Motor Speedway on Saturday, August 20.